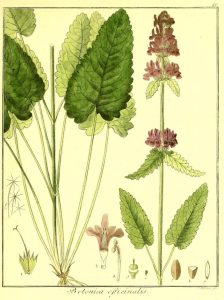 Description: Wood Betony is a small to medium sized herb native to the temperate forests of central and southern Europe.  William Salmon states that in England “the common sort is usually found in Woods and Coppices, and other shady places throughout the Kingdom, and is many times nursed up in gardens” (Salmon, 1710). Indeed in North America it is mostly “nursed up,” though it sometimes becomes naturalized. It has small softly lobed heart shaped leaves that for the first part of its life cycle grow in a rosette close to the ground. In June or July the plant sends up a slender stalk that hangs well above the leaves and contains a short purple red spike flower. It is a perennial in most temperate climates and has a thick, woody root.  The leaves are alternate on a square stem and have fine hairs that make them rough to the touch.

Energetics: Though some consider Wood Betony cooling (Easley, 2016) I would have to agree with William Salmon; “they [the qualities] are hot and dry in the second degree” (Salmon, 1710). I find Wood Betony to be an uplifting and slightly warming relaxing aromatic.

Taste: Sweet, Pungent, Aromatic, somewhat Diffusive, Demulcent and Astringent (aftertaste) – containing a hint of Acridity in the back of the throat in strong infusions.

Parts Used: Aerial Parts: leaves, flowers, and stem. “…the whole herb, collected from wild plants in July, when at their best, and dried. Collect only on a fine day, in the morning, but after the dew has been dried by the sun, cut off the stems shortly above the root (which is no longer used, as in olden days)” (Grieves, 1971)

Key Uses: Mathew Wood succinctly sums up what may be described as Wood Betony’s modus operandi, or underlying signature: “Wood Betony is a remedy which helps establish rootedness, connectedness, earthiness, and groundedness. It is a plant for people who are cut off from the earth or their bodies. It strengthens the solar plexus – the place that helps us feel connected – and through the solar plexus it strengthens the stomach and the rest of the nervous system, including the brain. Through this general strengthening property, Wood Betony enhances the actions of diverse organs – lungs, liver, gallbladder, intestines, kidneys and uterus. By strengthening the solar plexus and helping people to feel grounded, it has an impact on psychological health which helps explain its magical uses,” (Wood, 1997).

Clinical Uses: Antonius Musa was the physician to Emperor Augustus and the first to publish an account of Wood Betony in 23 B.C, wherein he detailed 47 uses. Maude Grieves’s account of Wood Betony opens by clueing us in to a common thread: “Betony was once the sovereign remedy for all maladies of the head, and its properties as a nervine and tonic are still acknowledged,” (Grieves, 1971). Wood betony has a dizzying number of historical uses and in Renaissance times was considered a general panacea ; “you should have as many virtues as Betony” was a saying of the time. Its underlying action appears to be through toning and strengthening the nervous system while simultaneously soothing nervous tension (Hoffman, 2003). It is well known as an excellent all-around remedy for headache, especially of a nervous or digestive origin. As an aromatic it is stimulating (carminative) to the digestive organs, relieving tension and gas, and acts as a good supporting or directing herb in any herbal formula directed towards the stomach. In early 20th century herbalism Wood Betony was used as an alterative in a number of inflictions involving ‘bad blood’ (scrofula, rheumatism, etc.).This makes sense in light of the understanding of alterative as ‘metabolic tonic’. Not surprisingly it has been noted that Wood Betony drunk before or during meals aids in the digestion of meats. Additionally Gerard tells us that “the herb cures the jaundice, falling sickness, palsy, convulsions, gout, dropsy and head troubles, and that the powder mixed with honey is no less available for all sorts of colds or cough, wheezing, or shortness of breath and consumption” (Gerard, 1597). Concerning Wood Betony’s use as an emmenagogue, the Trotula from the 12th century states: “If women have scant menses and emit them with pain, take some betony or some of its powder, some pennyroyal, sea wormwood, mugwort, of each one handful”.  It is interesting to note here that Wood Betony is more often used in formula than on its own.  Current clinical applications include its use in formula for various conditions with underlying hypertension. Some use has been reported of the isolated alkaloid Stachydrene for cases of obstructive liver conditions (see studies below). Also a few sources conclude that Wood Betony has a particular affinity to the muscles of the face, neck, shoulders, and middle back, where it acts as a skeletal muscle relaxant (Easley, 2016). In all these conditions it is further recommended if there is accompanying anxiety and nervousness. Perhaps this brings us all the way back to one of its original uses: “Wood Betony was the principal remedy used in the Middle Ages to exercise demons,” (Banckes, 1525).

Studies: “In 49 patients with obstructive jaundice who underwent surgery because they were unresponsive to conventional detoxification therapy, a Stachydrene preparation was given. Stachyrene was administered before and after the operation. Under the influence of the preparation, a more rapid normalization of the indices of homeostasis occurred. The most pronounced effect was noted in patients with benign obstructive jaundice.” (Bastyr, 2003)

“Russians report finding principals in wood betony with anti-inflammatory and cholagogue properties, and significantly hypotensive, but with no reference to human studies” (Duke, 2002).

Dosage and Method of Delivery:

-William Salmon lists 14 different preparations all with unique indications. It is certainly well worth a look but a bit too long to relate here.  Wood Betony is most commonly employed as a simple infusion of the dried plant.

-This varies only slightly with Michael Moore’s recommendations: